If you want to learn more about the many Protaras attractions that the resort has to offer, you have definitely come to the right place. The sun-kissed resort has everything needed for a fantastic family holiday, including sandy beaches, bars, restaurants and quality self-catering accommodation in the form of beautiful villas and modern rental holiday apartments. Enjoying the great outdoors and taking in some of the area’s sights is also a great way of making the most of your Cyprus holiday.

A diverse history, tradition and culture

As you would expect, the modern resort of Protaras is situated close to several historic and interesting sites. It is also home to some hidden gems which are just waiting to be rediscovered by those willing to take the time. From ancient churches and forest parks to sea caves and even a working ranch, visitors have access to a diverse range of Protaras attractions.

The Church of Profitis Elias

Sitting 115 metres above the resort, the Church of Profitis Elias was constructed in 1984 on the site of an original Byzantine chapel using stone from the area. Some experts have speculated that these stones may have been used in the original construction and everyone agrees that the materials used actually blend in perfectly with the surrounding area.

A ten-minute hike (or slightly longer at my age) will bring you to the top of the 156 steps where visitors are rewarded with spectacular and panoramic views across Protaras and the surrounding area. It is said that on a clear day, you can see as far as Cava Greco and even the ancient city of Famagusta with the naked eye.

The trees next to the church are adorned with ribbons and other items which have names or prayers written on them.
These are offered up to God via the Saint to which the church owes its name, while on an appointed day each year the name of the saint and those who share it is celebrated by processing the icon around the outside of the church. At this time, anyone wishing to receive a blessing from the saint is allowed to pass under the icon as it is carried by the priests.

The cava Greco (Cape Grecko) Forest Park is situated outside of the resort between Protaras and Ayia Napa. There are stunning views right across to Larnaca Bay and the region is perfect for outdoor enthusiasts such as cyclists, hikers and nature lovers.

The reserve is also home to a variety of fauna, flora and wildlife, including a small shrew-like creature which is considered uniquely indigenous to Cyprus.

If you are given to rising early in the morning, the park is also probably the best place in the region to witness a beautiful Cyprus sunrise. Miles of well-constructed and marked pathways make getting around the park easy and there is a brand new visitor centre there with its own café when you are ready for that well-earned rest.

One of the parks many attractions is the pretty little church which sits atop the rugged coastline above a cave which some claim was used as a hidden church during the time of Christian persecution on the island. A series of ancient steps cut out of the rocks leads down to the cave and a recently installed handrail has greatly improved access over the often slippery surface. This area is also popular with scuba divers thanks to its crystal clear waters and proximity to the beautiful Konnos Bay

Another popular Protaras attraction is the renowned Fig Tree Bay area which takes its name from the many fig trees that were originally planted across the beach. Located at the farthest end of the main strip, it has established itself as a popular destination with local tourist, especially during the annual Cyprus holiday period throughout August.

Sea temperatures in the bay area often exceed 30c during the height of the summer and the waters remain warm and pleasant late into the year making late-season bathing a pleasure well into November. There is no shortage of amenities at Fig Tree Bay including several restaurants, bars and shops. The location has also become a popular wedding venue over recent years with many of the new hotels providing dedicated areas for the ceremony and reception. 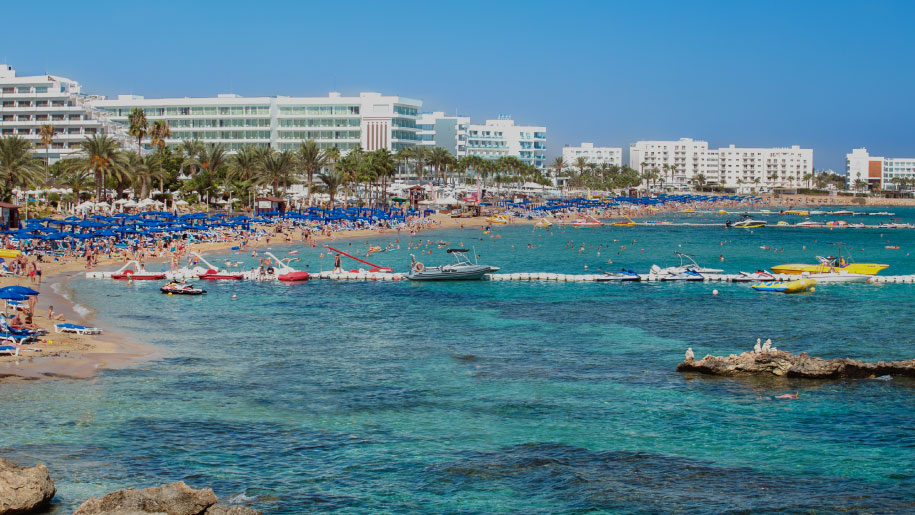 Along with safe sandy beaches, there are many tourist attractions in Ayia Napa and some of them are much closer than you may think. The former fishing settlement of some 200 people is steeped in history, culture and interesting places to visit. So, read on to discover what this bustling little town has to offer the more curious visitors.

Situated in the heart of the town, the Thalassa Museum is housed in a modern building and offers easy parking for visitors arriving by car. Focusing on Cyprus’s marine heritage it is home to an amazing replica of the fourth-century Greek trading ship which was recovered from the sea bed off the coast of Kyrenia in Northern Cyprus. Exhibitions and relics in the Thalassa Museum date back as far as prehistoric times and the collections include many unique fossils.

Located within the lower level of Ayia Napa Town Hall, the Marine Life Museum was inaugurated in 1992 and it exhibits past and present marine life. It is primarily an educational facility aimed at study, research and informing those who visit about the importance of marine life and the world’s oceans. Some of the establishment’s features include a reconstruction of a prehistoric seabed, marine plants, fossils and other marine life exhibits.

Probably one of the best-known landmarks in the town, the Ayia Napa monastery is located in the main square and it is uncertain how old the structure is. It is agreed, however, that a place of Christian worship in the form of a cave, has existed there since the Byzantine era. In fact, the current structure is built around such a cave.

The so-called “Ayia Napa sea palaces” are rocky outcrops which have been eroded by the sea over several millennia. Their apparent architectural appearance, which eludes to fine crafting and intricate shapes, has gained them their title. Situated between the main municipal beach and the Cape Greco Forest Park, they are best appreciated by boat and many such trips out of the nearby harbour, do in fact, sail past them.

Built on the site of the original tiny fishing harbour which once formed the hub of the community, the modern structure is still home to several traditional Cypriot fishing boats. These are moored next to the numerous pleasure craft which includes a rather uncannily accurate copy of the Black Pearl pirate ship. The harbour district itself includes a traditional square and lots of wide-open space which is fringed with several traditional fish restaurants and niche boutiques.